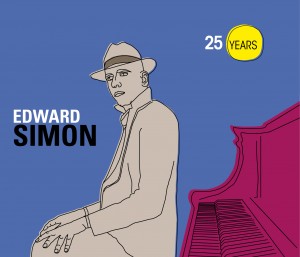 In 2020, Edward Simon celebrates his illustrious three-decade career in music. During this timespan, the Venezuela-born pianist and composer has led and co-led award-winning ensembles and collaborated with some of today’s most prominent jazz artists, including vocalists Luciana Souza and Gretchen Parlato; Afinidad, the long-running virtuoso quartet featuring David Binney, Scott Colley, and Brian Blade; the acclaimed chamber ensemble Imani Winds; and the all-star SFJAZZ Collective.

Never Weather is a jazz-inspired quintet that plays original music by drummer, vibraphonist, and composer Dillon Vado. The songs for this group explore many genres, grooves and textures to make exciting arrangements that allow for genuine improvisations each performance. Never Weather has 5 distinct personalities within the band and strives to make music that showcases each voice of the group.

Learn more about Dillon at dillonvado.com

When these virtuoso players meet on the bandstand, the result is sheer magic. Join revered French guitarist Romain Pilon, powerhouse drummer Brian Blade and internationally acclaimed bassist, vocalist, and composer Jeff Denson as they celebrate their Ridgeway Records album Between Two Worlds. The recording features originals by Denson and Pilon, who met two decades ago as students at Boston’s Berklee College of Music. After graduation they pursued their own careers, but reunited occasionally to reclaim their musical camaraderie. When Denson played with Blade on a 2017 tour with Joel Harrison’s Spirit House, they clicked. “We deeply connected right away, from the first notes in the sound check,” says Denson. “It felt like kindred spirits, rhythmically; a whole other language was taking place behind the soloists, and it was totally enthralling.” Denson thought of Pilon as an ideal third partner. “He’s a virtuoso player but very sensitive and very musical, the same words I would use to describe Brian.” Denson extended an invitation to Pilon and Blade, who enthusiastically accepted. The result is one of the most captivating new groups in jazz, a trio of players with unmistakable chops, unquestionable creativity, and probing sensitivity.