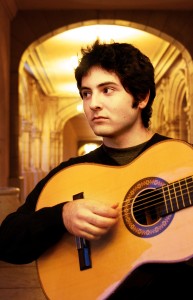 Ian Faquini is a Brazilian guitar player and singer who resides near Berkeley, California, where he was a member of the renown Berkeley High School Jazz program. At the age of 16, Ian became the mentee of the legendary Brazilian guitar maestro Guinga, who took Ian under his wing. In a very short amount of time, Ian has become one of the most unique and respected guitar players in the San Francisco Bay Area, demonstrating rare chordal technique and a special delicate touch on very difficult pieces. His last few summers have been spent in Brazil, where he has performed and studied with some of that country’s highest level guitar players, including Marcus Tardelli, Guinga, and others. Ian recently joined the faculty at California Brazil Camp, and is a graduate of the California Jazz Conservatory in Berkeley, and performs concerts in both a solo format as well as duos with saxophonist Doug Pet, flutist Rebecca Kleinmann, bassist Scott Thompson and others. Ian plays and sings originals, as well as a large reportoire of sambas, choros, bossa novas, and Brazilian classical guitar pieces.

Paula Santoro, who has earned critical favor in Europe and Brazil but is not well-known in North America, hails originally from the interior state of Minas Gerais, birthplace of Clube da Esquina, a lush strain of late ‘60s post-bossa nova music spearheaded by Milton Nascimento and Márcio Borges.

As a child, she said she would press her ear to the door of musical salons hosted by her grandfather, a doctor who played violin.

“I was not allowed to be there,” she recalled fondly, “and sometimes the door would suddenly open and they would be so surprised to find me there!”

Santoro studied classical piano and voice — as well as medicine, which she gave up for music — and sings with quiet clarity and passion.